The world-renowned City of Los Angeles, California, is the county seat of Los Angeles County, the most populous city in the state, and the second-largest city in the country. The city boasts a spectacular Mediterranean climate, extraordinary ethnic diversity, and an expansive metro area. Known as L.A. and the City of Angels, this place possesses stunning natural beauty, surrounded on three sides by mountains as it sits in a sprawling coastal basin. Los Angeles is divided into many remarkable and well-known smaller communities, including Greater Hollywood, Downtown Los Angeles, Westside, the San Fernando Valley, the Harbor Area, and Wilshire, among many others. Additionally, the City of Angels encompasses more than eighty neighborhoods and districts including Century City, Brentwood, Bel-Air, Westwood, and the Hollywood Hills. Hollywood Hills stretches across the 90046, 90068, and 90069 zip codes overlooking the city from its perch in the Santa Monica Mountains.

Among the neighborhood’s many desirable features, Hollywood Hills offers stunning views of Downtown Los Angeles, Catalina Island, and everything in between. The area has an alluring sense of seclusion, seemingly far removed from L.A.’s hustle, bustle, and traffic. However, it is convenient to all of the city’s many amenities and attractions. Hollywood Hills is generally thought of in east and west halves. Within the larger community, there are several smaller neighborhoods and subdivisions, such as Hollywood Heights, Hollywood Dell, Hollywoodland, Sunset Hills, Mount Olympus, Franklin Village, Outpost, Nichols Canyon, Whitney Heights, and Beachwood Canyon.

Our website features the best Hollywood Hills real estate search for homes, condos, land and foreclosure properties available. It is the only site you will ever need! It is easy-to-use and updated by the official REALTOR®’s database every 15 minutes.

You can save searches, and get daily email alerts of new listings, price changes, sold data, and market reports. Our Interactive Map Search allows you to view properties on a map or refine your search by drawing the boundaries around the area you desire.

Curious about what’s happening in the Hollywood Hills real estate market? Sign up for a Hollywood Hills Real Estate Market Report to see what’s active, under contract, and sold!

Contact us today to find out how we can be of assistance to you!

The stage is set for this 1938 tri-level property that is zoned residential/commercial (multi-use). Once owned by a prolific character actor whose 65 year career helped c...

Remarkable and unparalleled to any other. Welcome to 2204 Ridgemont Dr, your destination above LA city lights. Nestle in a desirable location, set high above of Laurel Ca...

Great Hollywood Hills Location. Just south of the of the Hollywood Sign & East of the Griffith Observatory this land has just under 6,000 sqft lot. Buyer to investigate p...

Attention developers, builders and flippers, here is your opportunity to create a breathtaking property in the prestigious Hollywood Hills. The impressive 15,000+ sqft lo...

Attention developers, builders and flippers, here is your opportunity to create a breathtaking property in the prestigious Hollywood Hills. The impressive 1900+ Sqft livi...

Luxury Live Auction! Bidding to start from $1,600,000! Traditional non-distressed, property. Cash or finance ok! Seller will entertain offers prior to the Auction date....

Attention developers, builders and flippers, here is your opportunity to create a breathtaking property in the prestigious Hollywood Hills. The impressive 16,000+ sqft lo...

Hollywood description.This world class destination located in Hollywood Hills Is offering one its crown jewels for sale. Featuring almost an acre of views. This rare Parc...

Based on information from California Regional Multiple Listing Service, Inc. as of . This information is for your personal, non-commercial use and may not be used for any purpose other than to identify prospective properties you may be interested in purchasing. Display of MLS data is usually deemed reliable but is NOT guaranteed accurate by the MLS. Buyers are responsible for verifying the accuracy of all information and should investigate the data themselves or retain appropriate professionals. Information from sources other than the Listing Agent may have been included in the MLS data. Unless otherwise specified in writing, Broker/Agent has not and will not verify any information obtained from other sources. The Broker/Agent providing the information contained herein may or may not have been the Listing and/or Selling Agent. 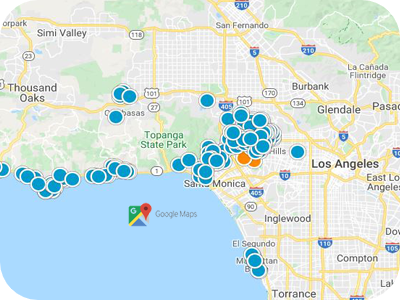